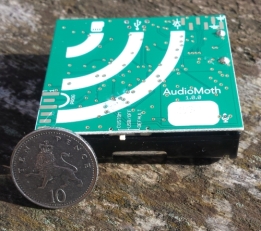 The AudioMoth is a small recording device produced by Open Acoustic Devices. It has been designed as an autonomous recorder, so can be programmed to turn on/off on particular routines, and can be configured to record bats as well as birds. Prior to the AudioMoth, programmable recorders were largely limited to very expensive models, so this is a game-changer at under £100 (see bottom of page re pricing and ordering).

It takes 3 AA batteries and a micro SD card and on a typical dusk to dawn cycle will run for two to three weeks (exact time dependent on night length and sample rate used). The unit itself is not waterproof so you must either fashion your own waterproof (but not sound proof!) box, or purchase Open Acoustic Device’s dedicated IPX7 AudioMoth case for an extra c£30 on top of the device price (c£50). Even so, the AudioMoth offers a lot for its price. Its appearance is deceptive too. At only 50×60×20mm, it’s tiny and its microphone is invisible under a tiny hole in the PCB. You’d think it can’t possibly compete with portable recorder and a shotgun or parabolic mic. But the results are surprisingly good.

AudioMoths have been used around the world for a range of purposes from soundscape monitoring to listening for poachers’ gunshots. Formal tests of AudioMoth have been undertaken (e.g. here) and though I’m not aware of exhaustive tests focused on nocmig capabilities, I have done some simple comparisons here and here. These suggest that the recording range and quality of an AudioMoth are slightly less than what you might get from a digital recorder, and understandably less than what you can from a parabolic mic. Nevertheless, they record plenty of birds, and in some situations their autonomous capability compensates. For example, in autumn 2019 I used 10 AudioMoths (funded by British Birds Charitable Trust) with volunteers in Cambridgeshire to record migration patterns of thrushes over a two month period. This would have been impossible with any other recording gear. In addition to picking up c9000 thrush calls, they also detected Barnacle Geese, Common Scoters and a range of owls and waterbirds. I’ve also used AudioMoths in Denmark and Italy for nocmig with good results. You can listen to other examples of NFCs recorded using an AudioMoth here.

In autumn 2020 the AudioMoth version 1.2 was released for ordering. Of the various modifications, the most exciting is the ability to add a 3.5mm audio jack onto the top of the circuit board, allowing for an external mono microphone to be attached. This would solve the waterproofing issues that have plagued some of my AudioMoth nocmig efforts and could allow use of high sensitivity external mics (e.g. EM172 capsules), potentially in parabolas. I have one on order, due to arrive in January 2021, so watch this space…

AudioMoths are built in USA and the cheapest way to buy one is to join a group purchase (see links at bottom of this page). When a group purchase is announced, ‘backers’ commit to buy one or more devices. Once some minimum number is reached, the factory gets to work and a shiny new AudioMoth arrives on your doorstep a couple of months later. It feels a bit weird buying in this way, and it’s a long wait, but it’s all above board and works smoothly. Prices quoted above are approximate conversions of $$ prices from GroupGets.